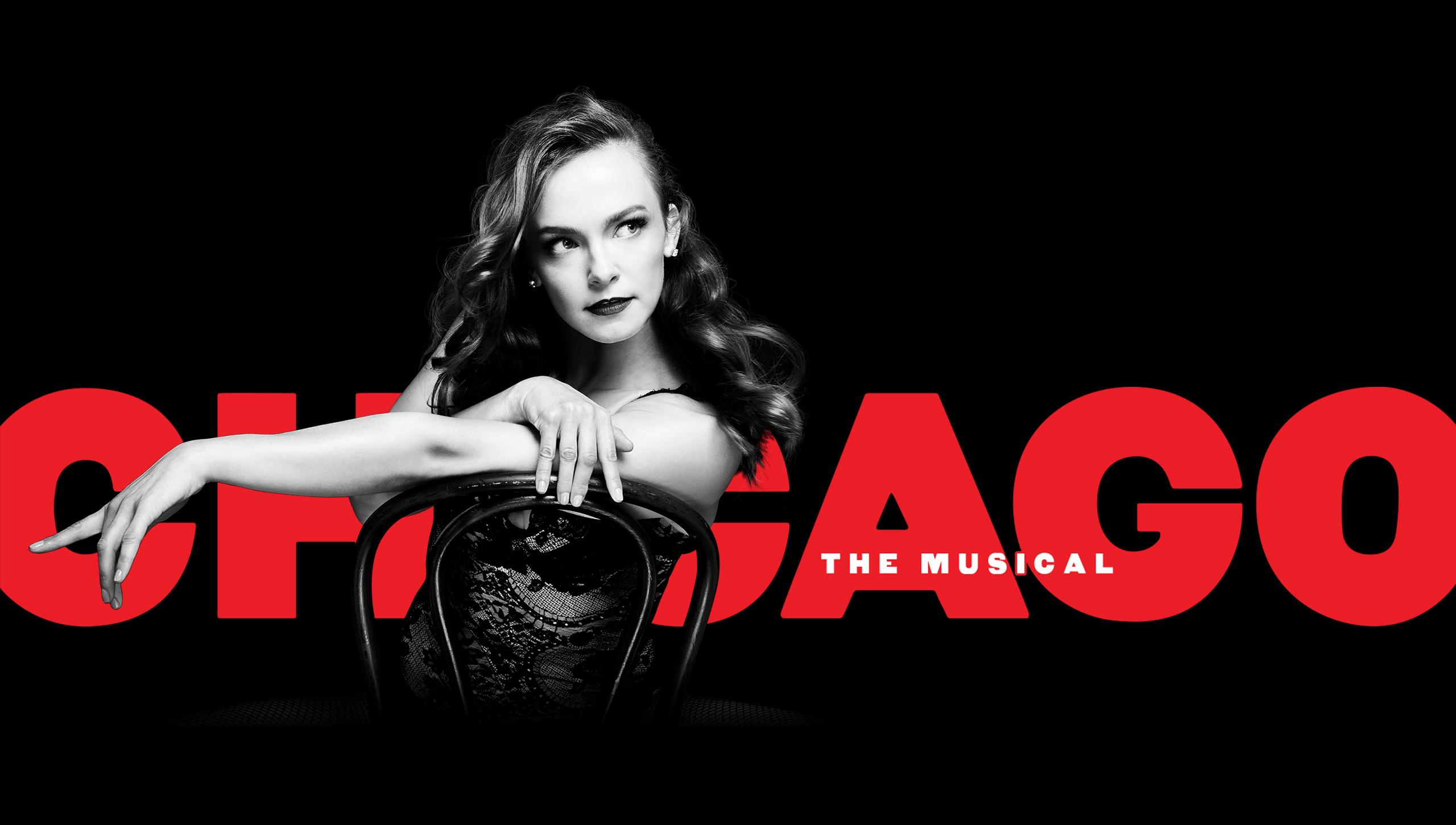 David Bushman has been part of the CHICAGO family since 2003. He’s performed the show all over the world, staged every union national tour since 2013, and has been a member of the Broadway company since 2014. He sends love to his husband, friends, and family, and a special dedication to Juanita.

Absolutely thrilled! Broadway: War Paint, My Fair Lady. Other: Crazy for You (Susan Stroman), Half Time (Jerry Mitchell), Catch Me if You Can (first national). Member of @rangemusic_nyc. Endless thanks to Stewart/Whitley, CGF & my family!

20+ years working in NYC. 8 Broadway shows. Outer Critics Circle, Chita Rivera, and Princess Grace Award winner. Over 40 film/TV appearances. Grateful for the support of friends and family who got me here!

Barrett Martin has an extensive career in NYC encompassing nine Broadway shows, multiple tours, various TV/film. Thanks to Rikky and Sean at the Hybrid, and endless support of friends and family.

Beyond thrilled to be back with Chicago! Broadway/tours: CHICAGO, West Side Story. Other: Kennedy, Goodspeed, Sacramento, Goodman, Muny. TV: “General Hospital.” Thanks to family and friends. This one’s for Mom!

NY credits: Shrek the Musical, Beauty and the Beast, Anyone Can Whistle (Encores!), Camelot “Live at Lincoln Center,” “Sondheim 80th Birthday Concert.” Sending love out to my wife, Haven, and our littles, Hudson, Caspian, and Nova.

Broadway: Jersey Boys. Tours: A Chorus Line, Fame, Jersey Boys. TV/Film: “Mozart in the Jungle,” “Law and Order: SVU.” Forever grateful for my family, friends, Stewart Whitley, MSA, and Chi Talent! This one is for my boys.

The John Kander and Fred Ebb collaboration of four decades has created what many would consider Broadway standards and contemporary classics: Flora, the Red Menace; Cabaret (Tony Award); The Happy Time; Zorba; 70 Girls, 70; CHICAGO; The Act; Woman of the Year (Tony Award, Best Score); The Rink; Kiss of the Spider Woman (Tony Award, Best Score); and Steel Pier. Their collaboration also transferred itself to movies and television as they wrote original material for the Academy Awards: “Liza with a Z” (Emmy Award), HBO’s Liza Minelli’s “Stepping Out” (Emmy Award); Funny Lady (Oscar-nominated for “How Lucky Can You Get”); Lucky Lady; New York, New York; Stepping Out; and CHICAGO (Oscar-nominated for Best Song). In the mid ’80s, the song “New York, New York” became the official anthem of New York City. At the time of the unfortunate death of Mr. Ebb, Kander and Ebb had several projects in different stages of completion waiting in the wings: The Visit, All About Us, Curtains, and Minstrel Show. Life goes on. CHICAGO is based on the play by Maurine Dallas Watkins.

A director, choreographer, dancer, and actor for films and stage, Bob Fosse was especially famous for his innovative and spectacular staging, with the emphasis on exhilarating dance sequences. Fosse began his career in Chicago, where he studied ballet, tap, and acrobatic dance from an early age. While still a teenager, he performed with a partner as the Riff Brothers in vaudeville and burlesque theaters. After graduating from high school in 1945, he spent two years in the U.S. Navy before moving to New York and studying acting at the American Theatre Wing. He then toured in the chorus of various productions before making his Broadway debut in the musical revue Dance Me a Song. As a dancer, he performed in two long-running musicals, Call Me Mister and Make Mine Manhattan, followed by such Hollywood films as Give a Girl a Break and Kiss Me Kate. As a choreographer, his first showstopping number was “Steam Heat” from The Pajama Game. This he followed with such hits as Damn Yankees with Gwen Verdon, Bells Are Ringing with Judy Holliday, New Girl in Town again with Gwen Verdon, and How to Succeed in Business Without Really Trying with Robert Morse. He began his career as a director and choreographer on Redhead with Gwen Verdon, Little Me with Sid Caesar, and two more Gwen Verdon musicals, Sweet Charity and CHICAGO. He also staged the innovative musical smash Pippin, the highly successful dance revue Dancin’, and the 1986 musical Big Deal. For the screen, Fosse directed the films Sweet Charity with Shirley MacLaine, All That Jazz with Roy Scheider, Lenny with Dustin Hoffman, Star 80 with Eric Roberts, and, most spectacularly, Cabaret with Liza Minnelli and Joel Grey. In 1973, Bob Fosse had the distinction of winning the three highest awards in three different media. He won a Tony Award for the musical Pippin, an Oscar for the film Cabaret, and an Emmy Award for the television special “Liza With a Z.” In 1960, he married his third wife, Gwen Verdon. From that union came his only child, a daughter, Nicole. During the Washington, D.C. run of one of his most successful shows, Sweet Charity, he died of a heart attack. This occurred shortly before the curtain went up on the night of September 23, 1987.

Ann Reinking received the 1997 Tony Award for Best Choreography for CHICAGO, as well as the Drama Desk, Outer Critics Circle, Astaire, and NY Drama Critics awards. Other credits include director and co-choreographer for Fosse (1999 Tony Award for Best Musical); Tony nominations for her leading performances in Dancin’ and Goodtime Charley; recipient of the Theatre World, Clarence Derwent, and Outer Critics Circle Awards for her work as Maggie in Over Here! Film credits: All That Jazz; Annie; Micki & Maude; and Movie, Movie. Recent choreography credits include Suite Kander for State Ballet of Missouri, Ritmo y Ruido for Ballet Hispanico, American Legends for Joffrey Ballet of Chicago, The Threepenny Opera for Williamstown Theatre Festival, Nilsson Schmilsson for Seattle’s Spectrum Dance Theater, “Bye Bye Birdie” for ABC-TV, national tour revival of Applause. She is the recipient of the Drama League Award for Distinguished Achievement in Musical Theatre 1999, Musical Hall of Fame Award 1999, Dance Library of Israel Award 1998, Distinguished Artist Award 1998, School of American Ballet Artistic Achievement Award 1997, National Arts Club Award for Service to the Arts 1995, and the Governor’s Award–Ambassador of the Arts for the state of Florida 1994.

Broadway: Sweat, Doubt, Proof, Other Desert Cities, The Color Purple, A Delicate Balance, The Heiress, The Sisters Rosensweig, The Most Happy Fella, Burn This, Penn & Teller, Ain’t Misbehavin’, Talley’s Folly, Fifth of July, Crimes of the Heart, among 100 others. Off Broadway: Sylvia; The Substance of Fire; The Road to Mecca; Song of Singapore; Lips Together, Teeth Apart; A Life in the Theater; 40 seasons at MTC, Circle Rep, Lincoln Center Theater and the major regional theatres. Recipient of Tonys, Obies, Drama Desks and Outer Critics Circle awards. Theater Hall of Fame.

William Ivey Long designs for opera, ballet, modern dance, theater, television, and film. He has 76 Broadway credits and has been nominated for 17 Tony Awards, winning six times. He was inducted into the Theater Hall of Fame in January 2006.

Ken Billington has over 100 Broadway shows to his credit, including the original Sweeney Todd, Waitress, Sunday in the Park With George (2008 and 2017), Act One, The Drowsy Chaperone, and Footloose. His Tony Award–winning lighting for CHICAGO has been seen in 36 countries. Other projects: Hugh Jackman in Concert, the Radio City Christmas Spectacular, Fantasmic! at Disneyland, and award-winning architectural lighting for work at NYC’s Tavern on the Green and Feinstein’s/54 Below. Ken is a member of the Theater Hall of Fame.

Scott Lehrer received the first Tony awarded to sound for Lincoln Center Theater’s revival of South Pacific. Recent Broadway includes To Kill a Mockingbird; Carousel; Hello, Dolly!; The Front Page; Shuffle Along…; Fiddler on the Roof; The King and I; Honeymoon in Vegas; A Delicate Balance; A Raisin in the Sun; Betrayal; Lucky Guy; Chaplin (Drama Desk); Death of a Salesman; and over 50 City Center Encores! As a music producer and engineer, projects include the Broadway cast recording of An American in Paris (Grammy® nom.), Loudon Wainwright III’s Grammy-winning High Wide and Handsome, Bebe Neuwirth’s Porcelain, and Meredith Monk’s mercy.

CHICAGO, Little Me, Funny Girl, Golden Boy, Pippin, and Sweet Charity. Film credits include Academy Awards for Cabaret and All That Jazz. Won the David di Donatello Award (Italian Oscar) for Movie and an Emmy for “Baryshnikov on Broadway.”

Rob Fisher was the original conductor and music director for CHICAGO and its Grammy Award–winning cast album, and now supervises all CHICAGO companies worldwide. He has been the music director and conductor of City Center’s Tony Award–winning Encores! series since its inception in 1994. Other credits: four seasons of Garrison Keillor’s radio broadcasts, numerous concerts at Carnegie Hall, New York City Opera, two evenings in the East Room of the White House, several programs for “Great Performances” (PBS), guest appearances conducting orchestras around the U.S., and over 20 recordings. Broadway and national tour credits include: Threepenny Opera starring Sting, Me and My Girl, A History of the American Film, A Day in Hollywood/A Night in the Ukraine, Little Johnny Jones, and Big River. ‘ ’

Rob Bowman returns to CHICAGO having served as musical director/conductor for the U.S. tour, Broadway production, and first national touring company (1997), and music supervisor for companies in Paris, Berlin, Holland, Australia, Stuttgart, and Seoul. Broadway: A Little Night Music, All About Me, Elaine Stritch at Liberty (also 15-year partnership as Ms. Stritch’s music director), among others. Rob is composer/arranger of Hot Mikado.

GARY CHRYST (Dance Supervisor) has staged CHICAGO choreography throughout the world and Pétrouchka for ABT, and danced on Broadway in Guys and Dolls, Dancin’, and A Chorus Line. Notable career as classical dancer with Joffrey Ballet and Nederlands Dans Theatre 3.

Composing, conducting, arranging, or pianist credits include My Fair Lady; The Sound of Music; Carnival; Hello, Dolly!; 1776; CHICAGO; Annie; Barnum; Baby; My One and Only; Crazy for You; and Swinging on a Star. Film: Indiana Jones and the Temple of Doom, Zelig, 1776, Mame, Annie, and Stepping Out.

Over a dozen Broadway productions, including Priscilla Queen of the Desert, Monty Python’s Spamalot, The Lion King, Man of La Mancha, Oklahoma!, and Miss Saigon.

Barry and Fran Weissler are the recipients of seven Tony Awards: Othello starring James Earl Jones and Christopher Plummer; Fiddler on the Roof with Topol; Gypsy with Tyne Daly; Annie Get Your Gun with Bernadette Peters and Reba McEntire; the 2010 revival of La Cage aux Folles with Kelsey Grammer; the 2013 revival of Pippin; and CHICAGO, the longest-running American musical on both Broadway and the West End. Other Broadway credits include Zorba, My One and Only, Falsettos, Grease, Seussical, Wonderful Town, Sweet Charity, and The Scottsboro Boys. Executive producers of Finding Neverland. Their newest hit, Waitress, currently playing at the Barrymore Theatre, features an original score by Grammy-nominee Sara Bareilles.

Alecia Parker serves as executive producer of all worldwide productions of CHICAGO, Pippin, Finding Neverland, and Waitress. Currently licensing Once internationally. Other credits, spanning more than 30 years, include executive producer of La Cage aux Folles, The Scottsboro Boys, Sweet Charity, Wonderful Town, Seussical; associate producer of Annie Get Your Gun, My Thing of Love, Grease, My Fair Lady, Falsettos, Fiddler on the Roof, Cat on a Hot Tin Roof, Cabaret, and Zorba starring Anthony Quinn. She is the proud mother of Michael Parker, Atlantic Records.

City Center, a not-for-profit theater founded in 1943 as Manhattan’s first performing arts center, is home to many of America’s leading dance companies, education programs, and popular engagements. The award-winning series Encores! was created in 1994 to revisit rarely heard scores, of which CHICAGO is one.